Ball Corporation’s Decision To Raise Aluminum Can Orders Is…

Downtown Sarasota is energetic – and sale of old…

Saturday, October 9th 2021, 11:24 am – This concentric pattern was captured as smoke plumes rose above an active volcano and was met by the Saharan Air Layer.

Mother Nature can work in mysterious ways to create a work of art out of something that appears to be nothing out of the ordinary.

In the case of the Cumbre Vieja volcano on the island of La Palma in the Canary Islands, Spain, a stunning cloud ripple recently formed above it amid the ongoing eruptions.

The Volcanology Institute (INVOLCAN) observed a rise in explosive activity on Oct. 2, and in the midst of the elevated activity, the Moderate Resolution Imaging Spectroradiometer (MODIS) on NASA’s Terra satellite captured a unique image showing a dense plume of ash streaming south just two days later.

SEE ALSO: Take a photo tour of the Canary Islands, a region shaped by volcanoes

According to the Toulouse Volcanic Ash Advisory Center, the plume soared to three kilometres in the air on Oc. 4, creating a hazard to aircraft nearby. Even though the activity spiked, volcanologists still assessed Cumbre Vieja’s volatile state as moderate — garnering a 2 out of 8 on the Volcanic Explosivity Index (VEI).

According to NASA’s Earth Observatory, the bull’s-eye-shaped cloud resulted from a rising column of superheated ash and gases — known as the eruption column. The floating pillar of water vapour and other gases arose rapidly upward until it clashed with a drier, warmer layer of the Saharan Air Layer (SAL) at roughly 5.3 kilometres altitude, according to INVOLCAN.

“A handful of incredibly unique ingredients all came together to create an amazing display on the Spanish island of La Palma as an incredibly active volcano erupted,” said Jessie Uppal, a meteorologist at The Weather Network.

The abnormally warm air situated atop a temperature inversion acted like a lid, stopping the volcanic plume from going any higher. As a result, it just levelled out and spread horizontally. 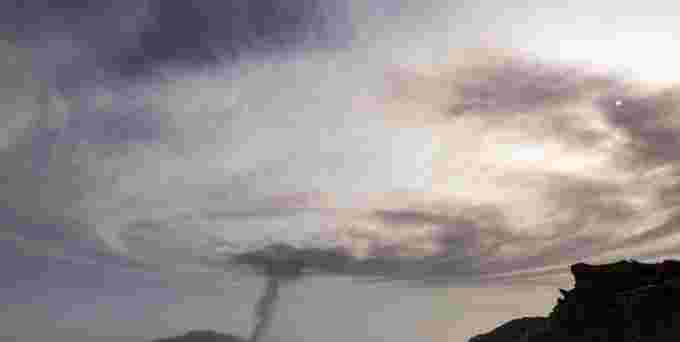 “We know warm air naturally rises into the atmosphere where the cooler air is surrounding it. This is exactly how we get the development of thunderstorms, but in this case, we have an eruptive volcano,” says Uppal.

The inversion is a layer within the atmosphere that temperatures typically increases with height, Uppal said, and that’s why “we see that column of volcano plume stop right there and ripple its way out.”

“Since volcanic eruptions typically have natural ebbs and flows in their intensity, pulses in the upward flow of the volcanic column created concentric gravity waves as they hit the temperature inversion and spread outward. The process is similar to the way a stone dropped in a pond creates ripples that spread outward,” NASA’s Earth Observatory explained. The good news about the particular eruption that yielded the picturesque sight was its lack of energy to send large amounts of ash and gases into the stratosphere, NASA said, where it can have “strong and lasting effects on weather and climate.”

With files from Jessie Uppal, a meteorologist at The Weather Network.

Downtown Sarasota is energetic – and sale of old building proves it

Agri laws: Repeal ripples will go far beyond the farm in Punjab

Small Business Saturday 2021 in Indianapolis: Where, how to shop

Why MoneyGram Launched A Bankless Payment Method On Stellar

Overnight closures on the Malahat cause supply chain issues

Opposed to Bitcoin Payments, Bank of Russia Says State Should Not Stimulate Spread…

Bitcoin Market Update Nov 20, 2021
Cryptocurrencies are anonymous and the government shouldn’t encourage their spread, the head of Bank of…

Ball Corporation’s Decision To Raise Aluminum Can Orders Is Unwelcome…

Now the Bank Refuses to Deposit