Bitcoin dips back below US$17,000, Ether falls, Dogecoin…

Disclaimer: The information presented does not constitute financial, investment, trading, or other types of advice and is solely the writer’s opinion

In anticipation of the release of the FOMC minutes on 23 November, BTC regained the $16K level and was up by 5%. It was trading at $16.5K at press time, boosting the rest of the altcoin market.

A similar price rally was seen before the FOMC meeting and subsequent 75-point rate hike between 2 and 3 November. But BTC declined afterward, coinciding with the FTX implosion.

If history repeats itself, the current price rally could be nipped in the bud by the ongoing FUD surrounding Genesis’ bankruptcy. That would send BTC plummeting toward the $14,000 mark in the long run.

Breakout from a descending triangle: Will the bears gain the upper hand? 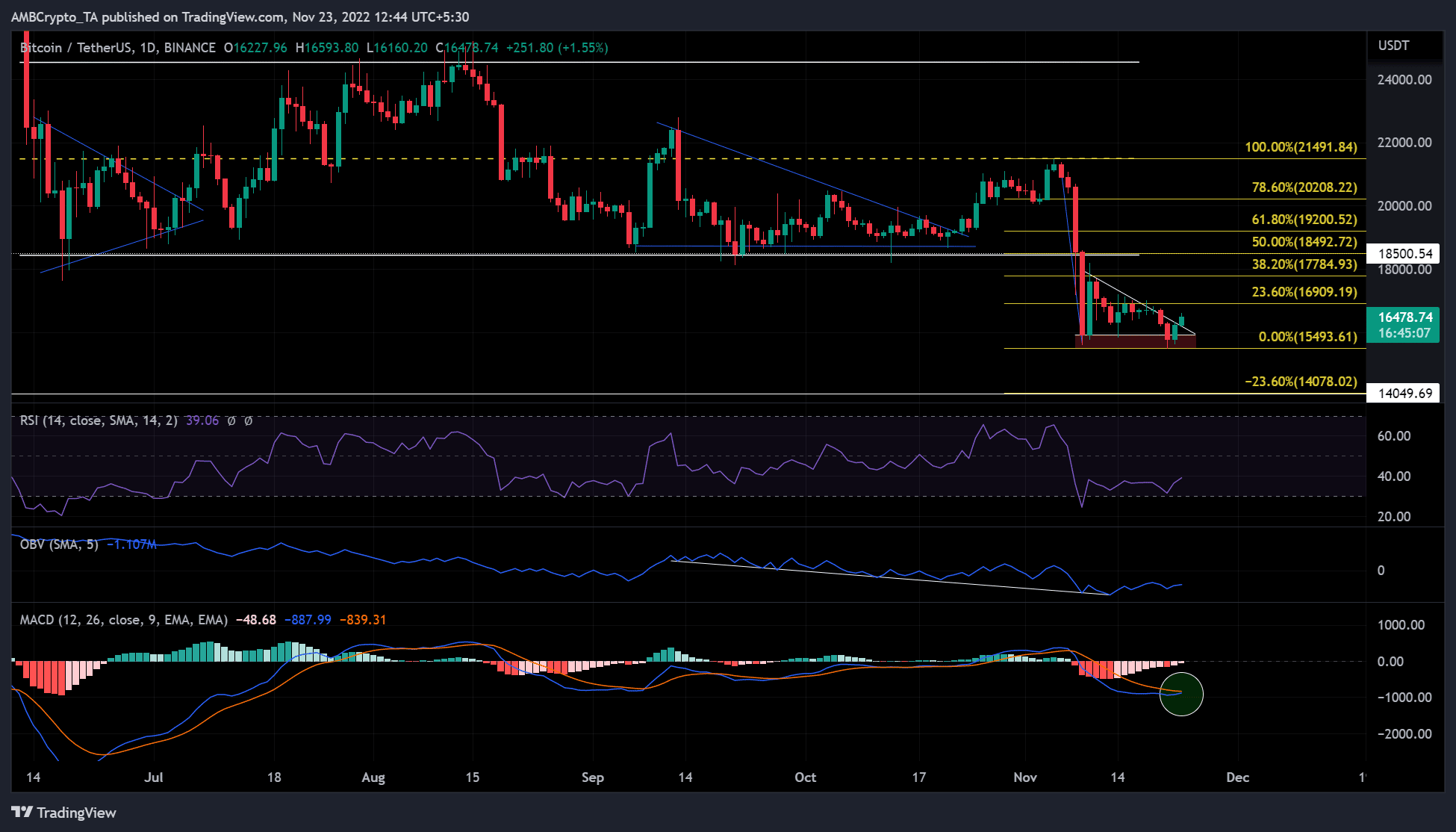 BTC traded between $18.5K and $24K during mid-July and mid-November. The midpoint of this range was $21.5K. However, since mid-September, BTC has been trading on the lower side of the range and finally broke through the support of the range on 9 November.

BTC found new support at the 0% Fib level at $15.5K and tested it thrice. The more times support or resistance is tested, the more likely it is to be broken. At the time of writing, BTC was in the state of a price recovery.

BTC’s price action over the past two weeks formed a descending triangle (white lines) that was part of a larger bearish pennant with a flagpole (blue line).

The current bearish triangle was also similar to two previous triangle chart patterns in July and October. In both cases, a false breakout to the upside was followed by a price drop. If history repeats itself, BTC could head lower after breaking through the current $15.5K support with $14K as possible new support.

However, a candlestick close on the daily chart above the 23.6% Fib level ($16.9K) would invalidate the bearish bias. Thus, confirmation of the breakout to the upside could coincide with a possible Moving Average Convergence Divergence (MACD) crossing. This could be a buy signal for investors.

Some on-chain metrics pointed towards a bearish structure of BTC. According to Santiment, BTC’s overall weighted sentiment further fell into negative territory, indicating a bearish outlook.

In addition, the recent price rally has been accompanied by a decline in trading volume. This represented a price-volume divergence. Furthermore, this also indicated a weakening buying pressure, which could undermine a notable rally. Therefore, the bulls could be overwhelmed, and BTC could see a deeper plunge in the coming days or weeks.

BTC investors should follow the FOMC minutes and the impact of Genesis’ alleged bankruptcy on the market to gauge sentiment and get a better perspective on the potential price direction.

Blockchain-based infrastructure forges the future for carbon markets, crypto and

After the FTX crash, here’s what you need to know – the crypto bubble is already bursting

Bitcoin Green (BITG) Do the Risks Outweigh the Rewards Thursday?

Will Snowfall Protocol lead Bitcoin Token and Quant in 2023?

What is Bitcoin.com’s VERSE Token